Emily Mullin is a subtle polyglot.  Her works – tableaux of glazed ceramic vases that hold exotic plants, and sit on painted steel shelves – combine elements of ancient Egyptian and Sumerian clay pots, Modernist patterning, machined construction, and hand cut flora so masterfully that days after seeing them at Lucien Terras  I find their effects difficult to shake. The pieces seem simple at first, but gradually deliver an unanticipated experience where rich optics and sharp formal play usurp the primacy of their own materiality.

Featuring a single pot covered in regular, long, fingerprint-shaped patterns and a tuxedo-blue shelf, Untitled (image X) is inviting, odd, and structurally succinct. Like all the pots in the show, this one is smallish and would fit easily in two open hands. Eight fountain-like arms elaborate a facade that works together with wax resist and glaze to form a texturally dense, semi-regular visual pattern running parallel to the piece’s stage-like front edge. Flowers twist upward with violet notes that burn; a counterpoint that foregrounds and amplifies the work’s otherwise low-chromatic air.

Untitled (image Y) features two plump, Sumerian-style vases. Leaning unevenly, the pair activate space with anthropomorphic charm. Martian red tones and hand-painted, checkered patterns graft the vessels and shelf together, flattening the distance between the middle and background by inviting the eye’s fluid movement back and forth across the forms’ silhouettes. Fresh foliage tucked into one pot offers a vital release of rich green, and the boldness of its counterpoint further intensifies the tableau’s tight visual hold.

Untitled (image Z) would be playfully excessive, if it were not so cooly removed. The piece is challenging, and rewards consideration. Its vivid, peppermint white-and-red, tic-tac-toe scheme borders on acrid. Three short, waffle-cut pots repeat the larger grid pattern. Two of them are set parallel to the front plane, while the third is intentionally shifted, creating a play between fractured, fabricated space and actual space. Red flowers wrench the eye a bit, their round petals blotting and breaking up the tense visual matrix.

These works successfully aggregate a broad set of disparate histories, substances and formal devices. Very much like the shallow space of a painting, they weave and bend a convincing optical fabric with threads coursing through a boxed front, middle and background. In each piece the fourth wall is enforced and then broken. Vectors of pattern, color, tone and line flow through everything, dissolving clay and steel into tightly compressed spatial systems. The vessels’ chunky forms and the exotic plants’ natural presence assert “real-ness”, but they don’t compete; the sets absorb them and steal the show.

Mullin’s work is keen in its casual appeal and masterful in its execution. The exhibition staggers by transforming physical elements into raw illusory events. In this way, the works are surprisingly more visual than physical, more virtual than real. 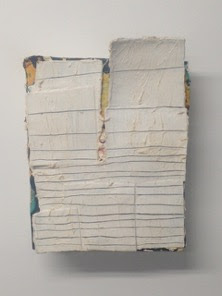